Designer and artist Enid Marx’s work can be viewed in the V&A collection. More biographical information can be found on her Wikipedia page or her obituary in The Independent.

ENID MARX AND HER CONTEMPORARIES:
Women designers and the popularisation of ‘folk arts’ in Britain 1920–1960.

This event is a collaboration between Manchester School of Art and Compton Verney in Warwickshire, it examines the problematic relationship that objects of material culture associated with the terms ‘folk art’ and ‘vernacular design’ have within debates about artistic value in British visual culture. It concentrates on the re-emergence of an interest in ‘folk art’, especially amongst women designers, in Britain in the first half of the 20th century, and looks at the way that both 'folk art' and particular types of design activity practiced by women have been omitted from traditional historical narratives of art and design.

The curatorial work and collections of women designers and educators during the early half of the twentieth century is one example of what Ellen Lupton calls the 'intangible contribution' women have made to the field of design. Noteworthy names in this respect are; Enid Marx, Phyllis Barron and Dorothy Larcher, Olive Cook, Peggy Angus, Pearl Binder and Barbara Jones. All were design practitioners and private collectors, who found little interest during their lifetimes from the art establishment in legitimising the work their collections centred around. They nevertheless mounted their own small exhibitions and published books and articles to publicise the works to a wider audience (see Myrone, 2009).

These collector/practitioners took creative and practical inspiration from the objects and images as aesthetic and culturally significant designs, but they also had a professional interest in the way that they had been made. Their collections were useful to the women in their profession as designers as well as ‘experts’ and educators. One of the aims of the event is to interrogate the relationship between the 'discerning eye' of the collector and creative practice.

Compton Verney houses the recently redisplayed Marx-Lambert Collection and a collection of Folk Art paintings and objects, which is the most significant single collection of the vernacular arts in Britain, see www.comptonverney.org.uk
No comments:

How Many Women Does it Take to Change Wikipedia?

According to the last Wikimedia Foundation editors survey, only nine percent of Wikipedia editors are women, down from 13 percent in 2010.

On 30 March 2012, the Smithsonian Archives hosted “She Blinded Me With Science: Smithsonian Women in Science Edit-a-Thon.” Ten Wikipedians showed up, armed with laptops and ready to tackle the significant dearth of articles on notable female scientists. Smithsonian archivists stood by to help the Wikipedians sort through the Archives’ and Libraries’ resources, both online and offline. Each editor chose a name or two from a list compiled by the archivists and started digging through the records. Many articles had to be started from scratch.

This is a call to all designers out there to organise local Edit-a-Thons. 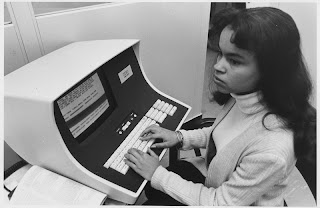 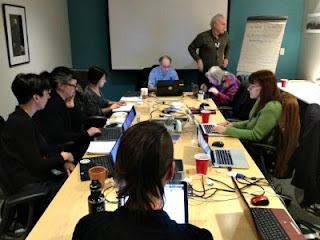