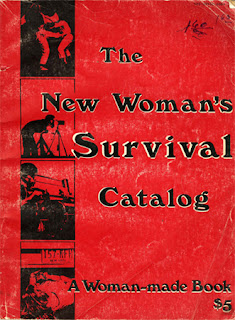 The New Woman’s Survival Catalog is a publication edited by Kirsten Grimstad and Susan Rennie in 1973 with the aim to strengthen a feminist network in the US and raise consciousness for different kinds of movements and associations concerned with feminist issues.

Working for a University, Kirsten Grimstad was initially assigned to put together a bibliography of women’s studies, but then decided to include also contemporary activities of women and women’s groups to take the research beyond scholarly scope. During the summer of 1973, Kirsten Grimstad and Susan Rennie were then taking the road for an extensive trip through the US, meeting all the individuals and initiatives that are introduced in the catalog personally and gathering information for the publication.

The New Woman’s Survival Catalog consists of several chapters such as art, communications, work and money, child care, self help, self-defense, getting justice and buliding the movement. The Catalog introduces women-run presses, bookstores, bands, law firms, banks, organizations and enterprises as well as schools and non-sexist playgroups for children and include their contact information.
"These projects express a rejection of the values of existing institutional structures and, unlike the hip male counter-culture, represent an active attempt to reshape culture through changing values and consciousness." (from the foreword)

The format and layout of the New Woman’s Survival Catalog are similar to the Whole Earth Catalog.
Further comparison on an ideological level might be interesting: starting from the difference between "WHOLE" and "WOMAN" in the respective titles – the first seems objective whereas the second is by definition subjective...
Quite striking is also "Survival" as part of the title (and mission).

The catalog itself as well as the projects and initiatives that it introduces are the outcome of non-hierarchic collective work and decision-making structures and processes. It also shows an urge for communication and exchange of experiences.

A PDF of the Catalog is available here: http://www.letsremake.info/PDFs/New_Womans_Survival_Catalog_3.pdf

There is a video interview with Kirsten Grimstad and Susan Rennie that provides more background information: http://www.youtube.com/watch?v=hDQrJOIYJ_4